Los Angeles – though its glamour and glitter often blind the tourists that flock here by the millions every year, us Burger TouristsTM know better.  We know that the City of Angels in fact a land of deadly sins.  Every experienced Burger Tourist has gone toe to toe with these beasts of human nature.  Let me regale you with a tale of these encounters.

Driving down to this week’s parish of the patty, we drove by other temples of tender flesh.  The San Francisco Saloon is situated near Plan B and Fantasy Island.  This apparently excited one burger tourist to focus less on the burger and more on the burger delivery mechanism as evidenced by the following quote: “She didn't even smile, but I guess that's ok because she was hot.”

There are few sins as regularly tempting as this.  The ½ pound of juicy tender beef was a great sight.  Staring at the mound of mince in front of her, one lady tourist remarked: “That’s a lot of meat!”  The patty was nice and thick with a good grilled flavor.  Another particularly ravenous tourist dispatched of her meat on meat (get your mind out of the gutter, you’ve apparently been around Plan B too much, it was a bacon cheeseburger) in less than 7 minutes, ending with a sigh and the comment: “I was starving! That burger hit the spot baby.”   She was floored before the night was over.

Many of us were surprised with their seatmate’s healthy options for sides.  One enthusiastic burger tourist remarked: “Loved the salad option.  They used romaine lettuce & had red onions.”  The darting eyes across the table told the tales of wanting. I observed that the quality of the greens was quite remarkable. This was quickly followed by the comments “I liked the variety” and “pasta salad was ok.” Indeed, I would argue that they would rival most sit down restaurants.

A few tourists knew in their hearts of hearts that they had this place pegged from the time they walked in the door.  Yet, as the burgers arrived and stomachs satiated a few words told another story…“Despite the "B" rating, I have to say that I really like this burger” or “For a "B" rated restaurant, it was really good.” And lastly, in one final attempt at salvaging one’s pride, “Maybe I've been wrong about rat turds… Ah this time kidding.  Two thumbs up!”

The Saloon is located just off the 405 and close to a concentration of burger enthusiasts.  So close in fact, it inspired the following remark: “Good Location!”

As the night drew to a close we were coming to the slow realization that this a special place.  We wanted to want more, but were quite satisfied.  We waned to find pick on something but could find anything.  All my fellow tourists could muster were a few words of praise. “I give high Kenny Factor 4 speedy service and STRONG VODKA.”   “Great bar atmosphere.” “Basic Good Customer Service...” “Very family like- all of us in one corner”

The San Francisco Saloon turned out to be a surprising oasis of virtue amongst the craziness of this wild and wooly town of ours. This is a place to kick up your boots, enjoy sports on the DirecTV, and let the servers who know how, just serve you. “This was a good tour,” that about sums up our feelings for the Saloon. There are few more balanced offerings for the ministers of meat in the City. 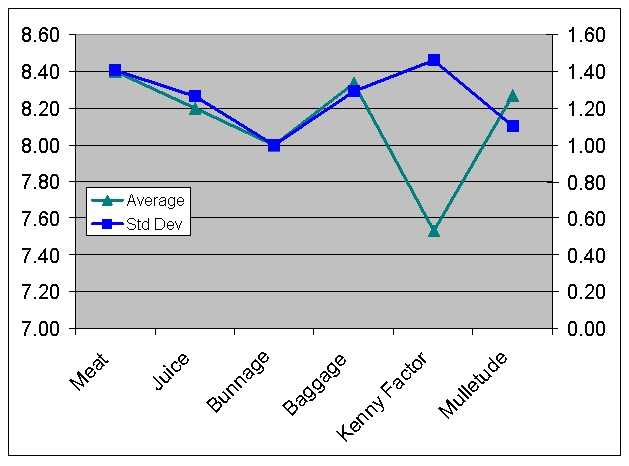