Sloth.  Gluttony.  Anger.  Lust.  Envy.  Not surprisingly, five of the Seven Deadly Sins reared their ugly heads as seventeen Burger Tourists descended upon Misti’s Kitchen at the Backstage, which is officially “Dedicated to Pleasure.”  And yes, there is an actual Misti.

How could our evening at the Backstage be reduced to one pointblank assessment?  As one tourist aptly put it, “ordered at 8:30, got burger at 10:15 – WTF.  Damn good meat.”  Indeed, the burgers were outstanding, but the Kenny Factor offers tremendous opportunities for improvement.  As one tourist noted, our orders seemed to be converted to burgers on a Last In, First Out basis with a throughput equaling one…  (Thanks Chris).  Early on, I spoke with Misti, who was overwhelmingly committed to customer satisfaction and very delighted to serve Burger Tour, but sadly she was unable to meet the rest of the group.  Although the Burger Tour fully acknowledged that we presented an incredible challenge to the production capacity of Misti’s Kitchen, the pace of service left many disappointed.  In fact, negative comments overwhelmingly pointed to this subject: “Kenny Factor was a real downer.”  On a more positive note, Esmerelda was given a huge stack of napkins, with the waitress presumably – as one observer speculated –

“expecting her to be filthy.”  I can’t help but appreciate such service.

As the curious boy he is, Whitney asked Misti, “Was this the most burgers you ever cooked in one night?”  See top for her reply.  Yes, Burger Tour pummeled Misti with her highest burger demand in history and, allegedly, just four burgers remained in her kitchen after our onslaught.  The burgers themselves were big, meaty and juicy.  In fact, “Juice” received the highest average score this week.  In terms of “Baggage,” many tourists chose to add a fried egg, bacon and avocado for an additional $1.50.  For “Bunnage,” Misti surprised us with a patty sandwiched between two deliciously greasy pieces of toast rather than buns.  One tourist noted the toast did not hold onto her burger, a.k.a. poor meat gripping ability, but folks seemed to approve of the toast’s presence overall.  I should mention that Misti’s Kitchen was recognized as serving the “Best Bar Food in LA” for 2005 by CitySearch.

The Backstage (the self-proclaimed dive bar which is home to Misti’s Kitchen) offers formidable mulletude.  Though we did not make use of the Ms. PacMan or Playboy pinball machine, the more sociable Burger Tour members sat around the pleasantly warm indoor firepit.  “We never have to worry about burgers getting cold,” proclaimed Tony, as he placed his dinner on the ledge next to the flickering flames.  (Not to be outdone, Matt later pointed out that his table – far away from the hearth, mind you – had its own candle.)  Surrounded by wood paneling and sitting on a curved leather bench built into a cozy corner, Lincoln and Whitney expressed themselves by gleefully tossing napkins and a small pencil into the fire.  Consequently, a gentleman briefly joined us and, without comment, closed the gap in the firepit’s screen.  Nonetheless, the hypnotic glow of the fire was a tremendous pacifier for those who were continuing to wait patiently for their food.  As a warning for those who might venture away from the safety of the tribal fire, I give you Jaime’s plight: A drunken woman, clearly in a fit of rage and attempting to join Jaime in the ladies’ room, was “kicking and body slamming the door.”  Alas, her exertions jammed the door, trapping Jaime.  With the help of Monica, the manager came and freed her.

With burgers still emerging from the kitchen, the dive bar atmosphere began to fade as DJ Shy and her 102.7 KIIS FM roadies set up shop on the Backstage’s small dance floor.  As a public service to those of us on the other side of the firepit, Tony noted that DJ Shy was “hot.”  Was it her exotic beauty, silky hair or taut physique that captivated him so?  Or, was it the finesse with which her skillful fingers gently cued her records and flicked the switches on her turntables?  We may never know, but be sure to ask Tony next week anyway.  Another tourist noted that “DJ Shy is DA Bomb.”  Well said.  Although she was not broadcasting from the venue, Lincoln wisely suggested that we ask for a BurgerTour.com on-air “shout out” at some point in the future.  Much discussion ensued between Chris, Lincoln and Tony.  In the end, and after impatiently watching inaction, I innocently approached DJ Shy, gave her a Burger Tour scorecard and Lincoln’s Burger Tour business card, explained the concept and requested a “shout out” for the tour during her next on-air appearance.  Don’t get your hopes up.

With the evening coming to a close, a flood of scorecards rushed to my hands.  Many bore heartfelt opinions on the service, the burgers and the mulletude.  Many offered comments that brought with them a chuckle – even a guffaw at times.  Only one was filled with the spirit of the green-eyed monster.  To paraphrase, “Could do w/out the DJ Shy … Andy proceeds to hit on DJ Shy.”  Flattering, yes, but I must clear the air.  As previously stated, no one else would step up to the plate to seek some much-deserved media attention for Burger Tour.  I refuse to apologize for my brazenness in promoting this valiant endeavor.  Knowing that the author is likely quite embarrassed by her comments now that the truth of the matter is known, I won’t name her here.  (Just ask me next week.)

In an unprecedented turn of events, a kind and generous gesture by Misti propelled post-submission score changes.  Sadly, some tourists had already left by this time, but a critical mass of our party received a free tray of shots.  Two extreme “Mulletude” scores were adjusted (and are reflected in the published data): a -7 was upgraded to a -6 and, more notably, a -1 was promoted to a 6.

“I’ve been requested as the camera wench.”

“Eating that burger took a year off my life.”

“Second half was soggy by the time I got to it.”

“Fire + Meat, I felt like clubbing a seal.  Great burger.” 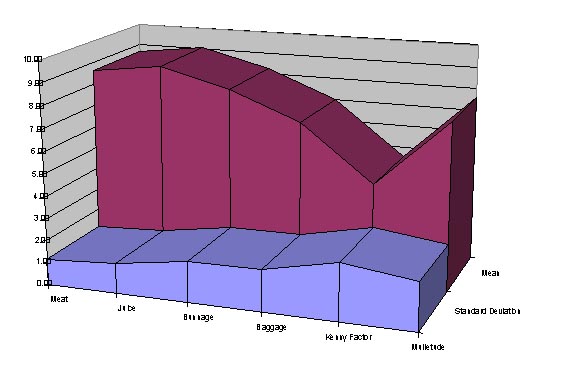